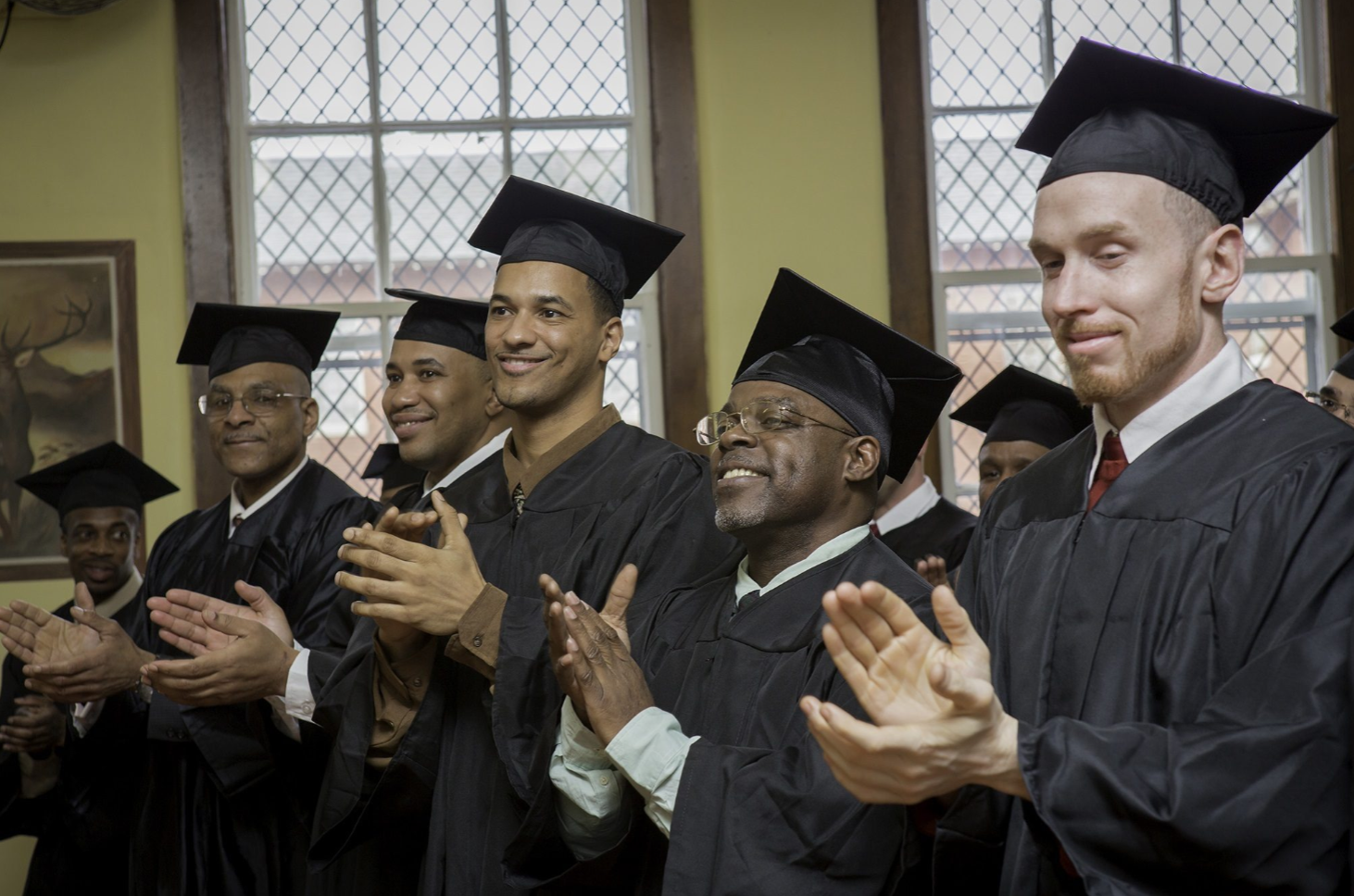 Ample research and results show that education has a massive impact on lowering crime rates and reducing recidivism — the likelihood of individuals returning to prison after release.

A study by Emery University found that:

If someone in prison receives the opportunity to learn an industrial skill or acquire knowledge in a specialized field, not only do they rarely return to prison (less than 10%), but they also go on to build businesses, create jobs, and inspire their local communities.

This shouldn’t sound new to any of us. We all know education can be effective. But what does it actually look like in the context of individuals who are incarcerated? How does education actually change lives?

Education transforms hopeless situations into inspiring opportunities to lead and give back.

Sean entered prison as a 9th grade New Yorker with a 24-year sentence. He said he had little hope in himself or any sort of redemptive future. But, when he began reading children’s books to fellow inmates and teaching them how to write letters to their loved ones, he witnessed how learning created a flicker of joy amid the isolation.

Soon, he enrolled in an organization called Hudson Link, a degree-granting program in prisons, and took college classes. Through that experience, he saw how the minds and hearts of individuals transformed through education and how it helped them learn about themselves and what was possible once released

After Sean was released, he went on to earn 400 credits from Nyack College and two master’s degrees from New York Theological Seminary and Hunter College. In 2007, Pica returned to lead Hudson Link as its Executive Director.

Today, Hudson Link’s programs provide postsecondary education to thousands of men and women in prison, less than 2% of whom return to prison, compared to the rate of 68% nationwide. Pica’s work saves New York State taxpayers over $21 million per year, and that number continues to increase.

Watch the video below to learn more about how the program is expanding.

The best person to teach the lessons you wish you were taught is you.

By the time he was 18 years old, Ohio-based Tim had 27 convictions on his record and spent the next six years incarcerated. “By everyone else’s account, I was a failure.”

But when he turned 25, someone gave him a chance in spite of his past and hired him full time. He went to real estate school and asked plumbers and electricians questions like, “How did you fix that?” He learned quickly.

In 2008, he launched Lawn Life, a nonprofit that employs formerly incarcerated young men and teaches them work ethics and business skills.

“Software engineers who are judged by the quality of the code they develop, not by the stigma of criminality.”

Growing up with an absent father, Kenyatta’s dealing with drugs and robbery with firearms led him to a life sentence in the San Quentin, California prison at the age of 22.

But when he turned 25, someone gave him a chance in spite of his past and hired him full time. He went to real estate school and asked plumbers and electricians questions like, “How did you fix that?” He learned quickly.

In prison, Kenyatta learned about The Last Mile, an entrepreneurship program for inmates. “I was always looking for a way to channel my entrepreneurial energy and gift.”

The Last Mile inspired Kenyatta to launch Code.7370, an education program that teaches incarcerated individuals how to code.

To overcome the challenge of no internet connection, Code.7370 created a proprietary programming platform that simulates a live coding experience. Once inmates graduate, they’re invited to join TLMworks, the first web development agency to provide individuals coming out of prison with the opportunity to earn a living, professional wage.

Kenyatta now helps train Fortune 500 companies to hire and retain employees who are exiting the criminal justice system, to create more inclusive work opportunities for those starting their second chance. Empathy undergirds the drive to accomplish a huge, meaningful vision.

From ages 19 to 34, Richard spent 15 years in prison for serious crimes he didn’t commit.

Even after his release, employers and apartments offered him nothing. “The perfect mixture for recidivism,” he wrote, referring to the obstacles he faced over and over again upon release.

When the case Miles vs. State of Texas exonerated him completely, he had one mission: to give men and women re-entering society housing, employment, and the opportunity to regain the dignity to rebuild their lives.

Watch this video to hear more about Richard’s incredible journey.

Knowledge breeds power and can have an exponential impact.

In and out of prison for 20 years, Marilyn struggled with drug addiction. Her time in California prison as a young woman made things even worse.

With the help and guidance of Root and Rebound’s Roadmap to Reentry guide, Barnes went on to earn her master’s degree in education, authored the book From Crack to College and Vice Versa and founded a non-profit, Because Black Is Still Beautiful.

Having experienced systemic problems firsthand, Barnes’ education fuels her passion to help people break free from the cycle of recidivism.

6. Hector, Getting Out and Staying Out

Change doesn’t have to wait until after a sentence is over. Change can happen in prison, along the way.

During his time at the infamous Riker’s Island prison in New York City, Hector regularly corresponded with Getting Out and Staying Out (GOSO), one of the most active re-entry programs in the New York City area for 16 to 24-year-old men.

Since his release, Hector completed a successful internship at a Brooklyn-based bakery, Ovenly, one of GOSOWorks’ employer partners, and was hired as their head of porters.

His story of transformation is one of many, as 86% of GOSO participants never return to prison and many have earned degrees or certificates from leading colleges and universities.

It’s easy to hear the word, “education” and not realize the immense power it has to transform lives. The six prison success stories above — Sean, Tim, Kenyatta, Richard, Marilyn, and Hector — are brilliant examples of how education empowers disenfranchised individuals to rediscover hope and self-worth, gain knowledge and skills, and take action to use their experiences to make a positive difference for those around them.

One-third of Americans — more than 70 million people — have some sort of criminal record, and more than 2 million people are behind bars at any given time. While 95% of them are eventually released, they’re typically blocked from accessing the education and resources they need to rise.

Stand Together is working to unite nearly 150 partners across communities, education, business, and government to multiply their effectiveness and drive necessary institutional change from all angles. Partner initiatives tackle various criminal justice issues, including overcriminalization and policing of minority communities, lack of effective counsel and due process, overly punitive sentencing, and lack of re-entry resources and training for people exiting prison.

Learn more about how Stand Together is working to shift the narrative around criminal justice reform. Interested in becoming a partner? Contact us today. We can accomplish more together than we ever could alone.