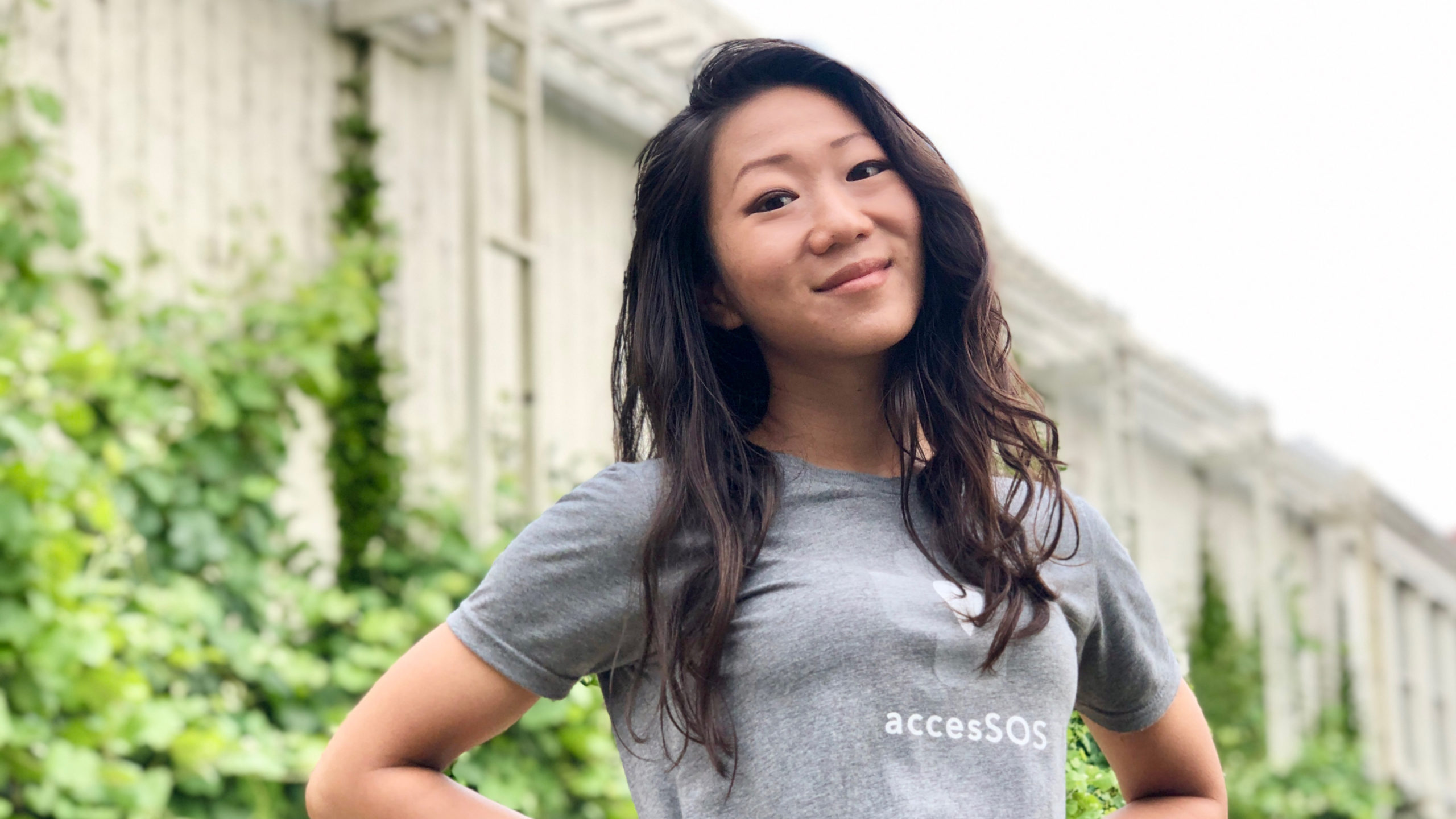 For many Americans, 911 is synonymous with immediate rescue. Call the number, and the police will be on the scene near-instantaneously, equipped to handle any situation.

But for Gabriella Wong’s father, this wasn’t the case. Wong grew up communicating with two deaf parents in American Sign Language. By most measures, they were able to live as any other family. Until Wong’s father got into a car accident.

Unable to speak over the phone himself, he had to text Wong to ask her to call 911 for him. Later, when her father’s gallbladder ruptured, he did the same — but Wong missed the texts. “During one of the most vulnerable, desperate moments of his life, he couldn’t contact 911 to get help,” says Wong. “He almost died because of this.”

Founded by Wong, accesSOS is a text-to-911 app that hopes to change that.

By providing language and disability-inclusive options to get in touch with 911, emergency services are accessible to anyone.

But access to emergency services is only part of the problem with today’s 911 system. Additionally, accesSOS can triage calls and direct them toward the service most appropriate for the call.

Though the triage service is not a live part of the app yet (it is expected to be available in Quarter 2 of 2023), it will work as a series of questions the caller will be asked about the kind of emergency they are having. This will help 911 respond to the call and will redirect calls that are better served by 988 — the dialing code launched in July of 2022 that routes callers to the National Suicide Prevention Lifeline – and other support services. This has the potential to lift a major burden on law enforcement.

Here are seven things to know about 911 and accesSOS:

Law enforcement carries the burden of being the de facto responder for all problems even when they are not the best suited response. Without knowing the appropriate service to reach out to, many people default to calling 911, meaning that police officers’ time is sometimes allotted towards non-emergency services when it is needed elsewhere.

One of the benefits of accesSOS is that it would be able to tailor the emergency response to the crisis at hand. They do this by asking questions that get at the heart of the emergency. Wong says that one of the early concerns with the app was that users didn’t always want the police to respond. Some calls — mental health emergencies, domestic situations that don’t have weapons, suicidal ideation, erratic behavior calls, and more — require a different kind of response and police may not be the best call.

2. Triaging 911 calls will lessen the burden on police officers

Police officers are the de facto first responders to every 911 call even though many calls need other kinds of services. The fact is, at least 20% of 911 calls are either mental health or substance abuse issues that do not need police intervention.

As a solution, accesSOS can match the caller with the responder who can best suit their needs, leaving police officers freed up to respond to the calls where they are most needed. In San Francisco, for example, there are specific crisis response teams who can be called out for a problem stemming from someone living on the streets. Other cities have similar crisis response teams who are trained to de-escalate and give aid to people who need a different kind of help.

Additionally, Wong says, some calls can simply be solved over the phone, eliminating the need for any dispatch of services at all.

It’s a win-win for everyone.

3. 911 would need an expensive update to be able to accommodate what accesSOS can do now

When 911 was built in the 1960s, Americans only had landlines. In today’s era of mobile phones, 911’s systems aren’t engineered to receive texts and it would require a costly equipment overhaul for this to be possible everywhere.

While it is possible to text 911 in some areas of the country, it isn’t available everywhere and it doesn’t offer triage capabilities in the same way accesSOS does. The earliest that nationwide emergency help could be available via text-to-911 is 2032.

For those left vulnerable by communication barriers, waiting that long isn’t an option.

Today, 65 million Americans don’t have access to rapid emergency help. Getting in touch with 911 can be a struggle for those who are deaf or hard of hearing and people with speech disabilities or who speak only limited English. In the case of domestic violence survivors, speaking aloud to emergency services may put them in danger.

The accesSOS app offers contact with alternative services, allowing users to access a variety of emergency services such as mental health professionals, social workers, and people who are trained to help in emergencies not suited for the fire or police departments.

These abilities could potentially be the difference between life and death for people who are unable to make a phone call.

To use accesSOS in areas where it’s available, simply open the app (or go to contact911.org in your phone’s browser). GPS services will automatically collect your location info. You will then be led through a quick series of prompts allowing you to provide more details about what happened. The app will then contact 911 using the information you provided.

The app also automatically works in the language your phone is set to, meaning that non-native English speakers are able to access emergency services as well.

6. The organization that created accesSOS is a nonprofit

The organization wants to use its platform to spread awareness of the issues emergency responders, 911 operators, people who are hard-of-hearing, and many others are facing. Like how 70% of call centers can’t receive texts, while 37 million Americans can’t hear or speak aloud and, thus, can’t place calls.

7. Look out for accesSOS becoming available in your city

The AccesSOS app is currently only available in Santa Fe, New Mexico, but will be spreading to other cities across the country soon.

The app demonstrates that solutions to municipal issues need to be flexible and inclusive of a wide range of people facing different barriers. The best way to make this a reality is to do just as Wong did and start with listening to the stories of individuals on the ground, then creating a solution that addresses the challenges they’re facing.

accesSOS is supported by Stand Together Trust, which provides funding and strategic capabilities to innovators, scholars, and social entrepreneurs to develop new and better ways to tackle America’s biggest problems.