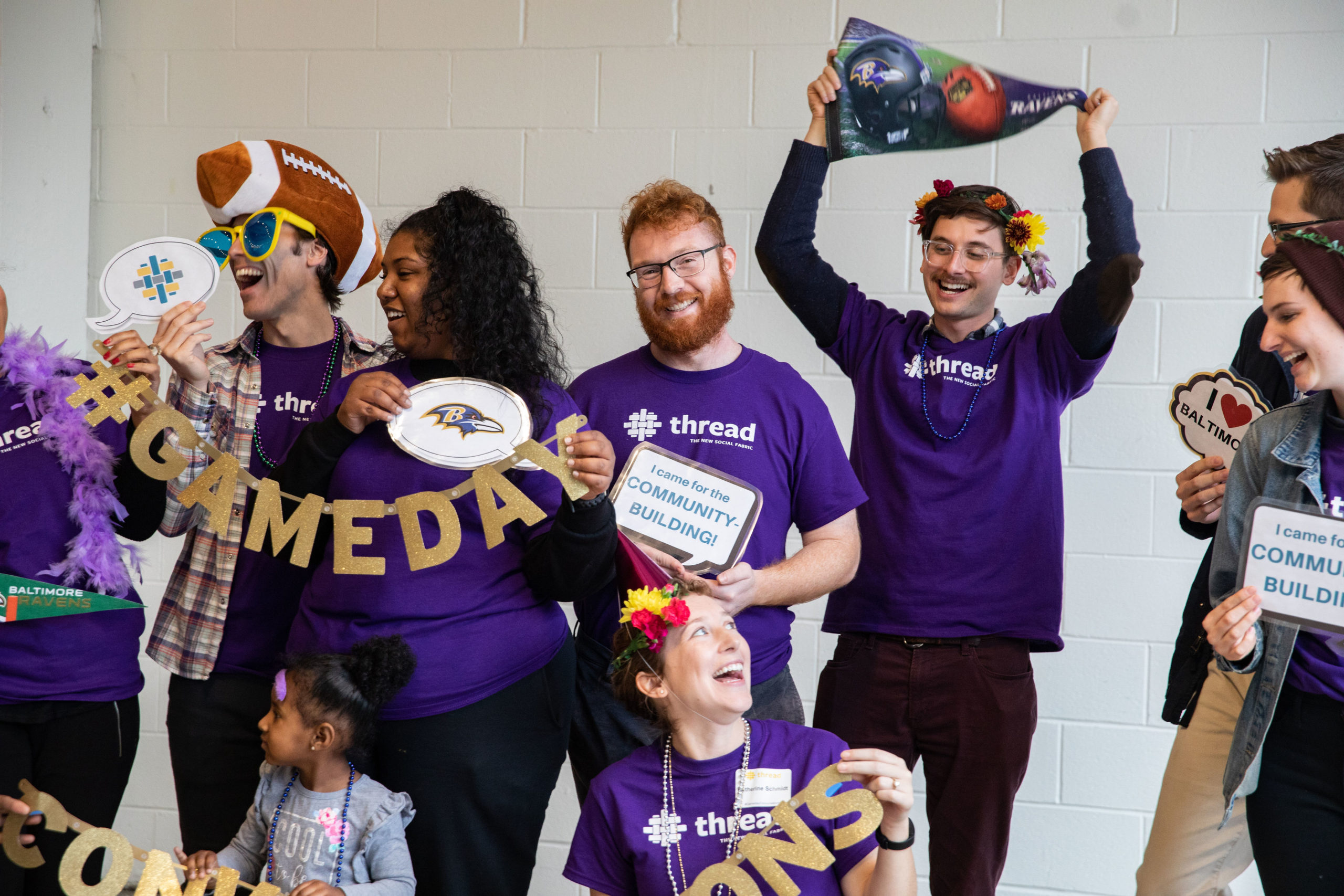 How the Baltimore Ravens and Thread are bringing fans together

Football. Food. Family. Three elements that have the magical ability to bring people together were at work in a new way this Fall: bridging divides and building authentic relationships across differences in Baltimore, a city too often defined by its cultural division.

This is “Gameday Conversations,” a collaboration initiated last year between the Baltimore Ravens and a local non-profit, Thread, in order continue to push back against social isolation and identify ways to bring people from diverse or siloed communities together.

“Regardless of your age, your race, your class, people love to cheer for the home team,”

At these gatherings, there’s only one rule: You have to sit next to someone you don’t know and be willing to have a conversation.

Matt Lawrence, a former Baltimore Ravens running back, was among the first to greet fans at one of six gatherings hosted throughout the city as the Ravens faced the Cincinnati Bengals on November 9. The gatherings are the first of their kind and an inspiring effort to bring people together to share food, conversation and home-team gusto, despite age, background, race, socioeconomic status, or political affiliation.

For the past decade, Thread has been building relationships within the city connecting students with the greatest opportunity gaps to a “Thread Family” of up to four volunteer mentors. This Thread Family supports each student in whatever way is needed as they continue their schooling. Each Thread Family is then connected to a thread of eight different Families. This idea of connection not only supports students in Baltimore, but also sets an example for individuals across the community to get to know their neighbors and work together to strengthen their community.

Thread’s innovative model is based on exceptional student results, with successful outcomes such as an 85% high school graduation rate and 83% of student alumni completing a 4 or 2-year degree program or certification after high school. The Thread community includes over 1,200 volunteers, serving over 500 students (soon to be 700+ when they enroll their new class).

In the past year, Thread saw an opportunity to spark a broader movement that impacted the city by proactively creating “positive connection points” that engage a broader audience. Hence, the launch of Gameday Conversations.

“We want to be able to use the platform that sports has, specifically Ravens games have, of bringing groups of people together and cheering on their team and really being able to use that to dive deeper into building relationships, friendships and a network amongst fans and people who might not get to know each other otherwise,” says Heather Darney, senior director of community relations for the Ravens. “And I know today I’ve gotten to know several people that I didn’t know otherwise.”

Here’s what it looks like: On game day, an hour before kickoff, food is served at watch parties around the city—in homes or larger event spaces. Fans find a seat next to someone they’ve never met and they’re given some ice breaker questions — How long have you lived in Baltimore? What was your first job? — to get the conversation started. Then they move on to more sensitive questions — When have you experienced loss? What is your greatest fear? — to encourage deeper connection. People who were strangers when they walked in are now talking. Once the game starts, they’re continuing to chat while watching. And suddenly a bridge is built between two people who would never have met outside this space.

This is a clear demonstration that the natural camaraderie formed through shared experiences can be harnessed to pave the way for valuable connections. Delshan Baker, vice president of investment for Thread, explains, “You would have a young person who may need a job, for example, and gets connected with another organization that can help them with an internship. And if it wasn’t for watching games together, then we wouldn’t have made that connection.”

“In Baltimore, we have some really incredible pockets of social capital. What Thread is trying to do is help us find one another … and begin to understand what someone else’s life is like and how ours is inextricably linked to theirs.”

Rubab Malik joined Thread when she was a junior at Johns Hopkins. Her own father’s childhood in a developing country mirrored the experiences of the kids Thread was reaching out to, and she wanted to be part of the support system the program was creating. She serves as “head of family” for three other volunteers and has supported a student for the last two years.

“Baltimore feels more like a home than my own hometown in New York just because I think that here I’ve actually gotten to know the community that I’m present in. Thread’s really been pivotal for me in terms of teaching me what community truly feels like and how empowering it can be,” Rubab explains.

The Stand Together community is proud to partner with innovative groups like Thread that are working to create strong connections and positive change. As a Stand Together Foundation partner, Thread is demonstrating the power of bringing people together from all walks of life, despite their differences, and encouraging them to build relationships with one another to propel their city forward.

Learn more about our efforts on Bridging Divides and Building Respect here.