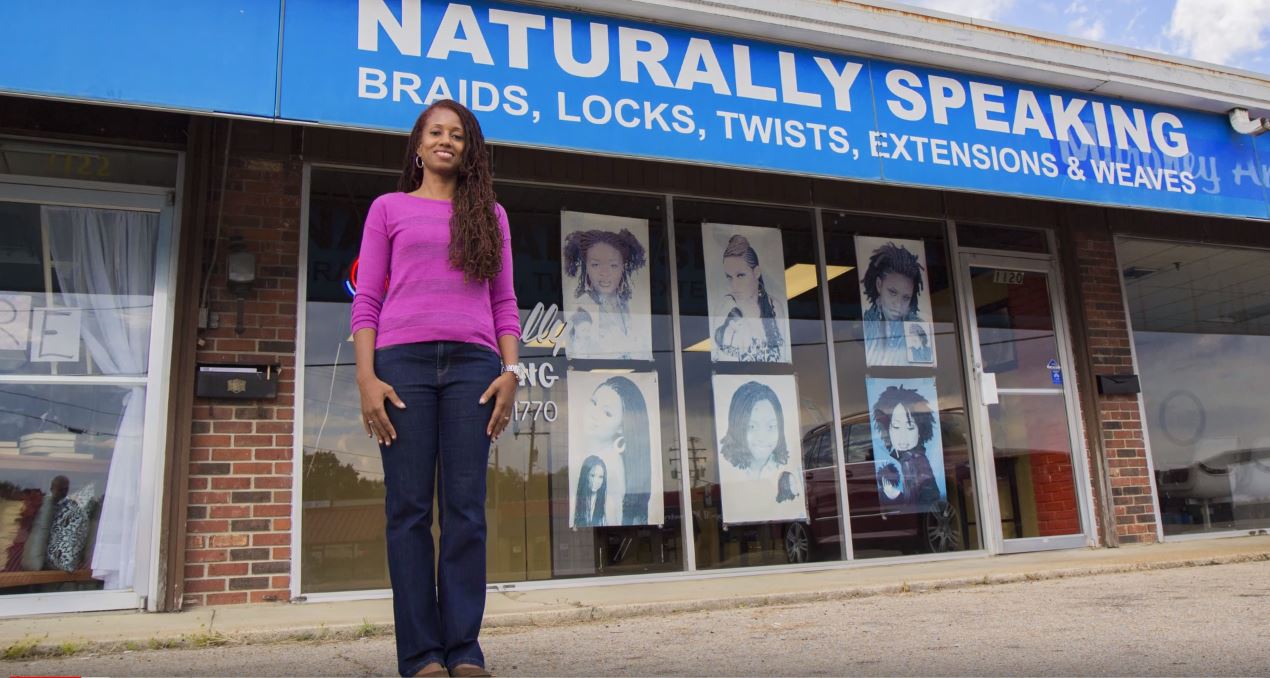 How one hair-braider unlocked opportunity for entrepreneurs

“Just because something is, doesn’t mean that’s the way it has to be,” reflects Melony Armstrong.

Melony is an entrepreneur who refused to give up, despite running into significant barriers that thwarted her ability to run her business. She remembers the moment she knew she wanted to become the first professional hair braider in Tupelo, Mississippi.

“I had an experience in getting my own hair braided. When the stylist turned my chair, and I saw my hair, a light bulb went off.”

From that moment on, Melony dedicated herself to learning and perfecting the art of hair braiding. Though her mom had taught her how to braid from a young age, she traveled 300 miles to take classes and train under a professional in Atlanta, then spent the next six months practicing and mastering different techniques. But when it came time to turn her new skills into an income-generating business, an onerous and restrictive occupational licensing requirement prohibited her from doing so.

Melony quickly learned that in Mississippi, she would be required to pay $10,000 and sit through 18 months of cosmetology training before she could open her doors. Melony could have become a firefighter, police officer, or hunting instructor in less time than was required to become a professional hair braider.

For a bright and motivated woman with limited means, this was more than discouraging – it was a monumental setback. “I did not have that type of money,” explains Melony. What’s more, cosmetology training doesn’t actually teach hair braiding! So, she would’ve had to spend a year and a half of her life, and savings that she didn’t have, to learn skills that weren’t even relevant to her trade.

But Melony’s deep passion for her work compelled her to continue fighting for her dream. She went back and forth with the Mississippi Board of Cosmetology in search of another option. Melony’s persistence paid off. After two years of letters and phone calls, Melony discovered a way forward. “There is something called a wigologist license that you can get,” she was told.

A small window of opportunity had finally opened, but it was closing rapidly. As it turned out, wigology was a dying art. After searching on and off for two years, she finally found a school that would teach the required classes. And when Melony finally got her license, the school told her she would be the last wigologist trained in Mississippi.

Nonetheless, the first seeds of Melony’s dream sprouted, and she opened the first hair-braiding salon in Tupelo, Mississippi, called Naturally Speaking. Residents who previously traveled across state lines to get their hair braided finally had access to a local hair salon that catered to their needs. The business took off with a steady stream of clients, but hair braiding is time intensive, and growth was constrained by the inability to hire more workers.

When Melony became pregnant with her second child, she quickly realized her business would not be sustainable without help. Other hair braiders approached her for jobs, and though Melony was in a position to bring on more employees, she had to turn them away because of the occupational licensing law.

“I’m telling people, at this point, the only way they can get a job with me is to go and spend a year and a half of their life and roughly about $10,000 to get a cosmetology license. No one took me up on that.”

The time had come for Melony to take her private battle public. Hair braiding is often handed down from generation to generation, as aunts and mothers pass on heritage and tradition. Yet, the law told all of these already skilled hair braiders that skill was not enough. Hundreds of professionals were being boxed out of an entire industry because they didn’t have the financial means to meet outdated and often unnecessary licensing requirements.

With the help of Americans for Prosperity, Melony set out to change the occupational licensing law. And after a seven-year slog partnering with the Institute for Justice, Melony finally won her battle. The day after the reform was signed into law, 300 women became hair braiders.

One in four occupations require people to get a license to work—many of which are costly and unnecessary—restricting competition and throttling entrepreneurship.

But, it’s not just hair braiders who have been shut out. Other industries – florists, tour guides, barbers and many more – have been subject to similar occupational licensing requirements that hamper their ability to use their skills professionally.

Melony didn’t want unnecessary regulations to crush the dreams of other aspiring entrepreneurs, so she partnered with Americans For Prosperity (AFP) – part of the Stand Together community – to fight for even broader, common-sense reforms. Working with leaders in the state legislature, Melony and AFP helped thoughtfully craft a bill that would ensure licensing requirements apply only where there is a verified public safety concern.

In 2017, this legislation was signed into law and became the most sweeping overhaul of occupational licensing regulations ever enacted in any state at the time. But the story doesn’t end there.

“When you have been liberated, or when you have found a sense of freedom,” explains Melony, “and you come across people that are not, you want to make sure that they find the freedom that you did.”

“In 24 states, hair braiders need more training than emergency medical technicians. Completing the necessary coursework in one of these 24 states can cost upwards of $20,000 and requires up to 2,100 hours of training. By comparison, EMTs need, on average, about 140 hours for their licenses.”

And so, Melony and AFP are partnering with other aspiring entrepreneurs in other states, working to expand opportunity for hair braiders and aspiring entrepreneurs across the country.  The Mississippi law served as a model for regulatory reforms in Nebraska and Ohio. And what started with just one person, then expanded to 300 hair braiders in Mississippi and has now grown to 4,000 hair braiders across the state. That’s 4,000 lives changed through one person’s unwillingness to give up.

“It’s been extremely rewarding from what we’ve seen – the lives that have changed and the lives that are continuing to change,” reflects Melony’s husband, Kevin.

“This whole experience has broadened my vision,” continues Melony. “I feel even more empowered, and all of those things I still want to do, I’m going to do them, and nothing’s going to stop me.”