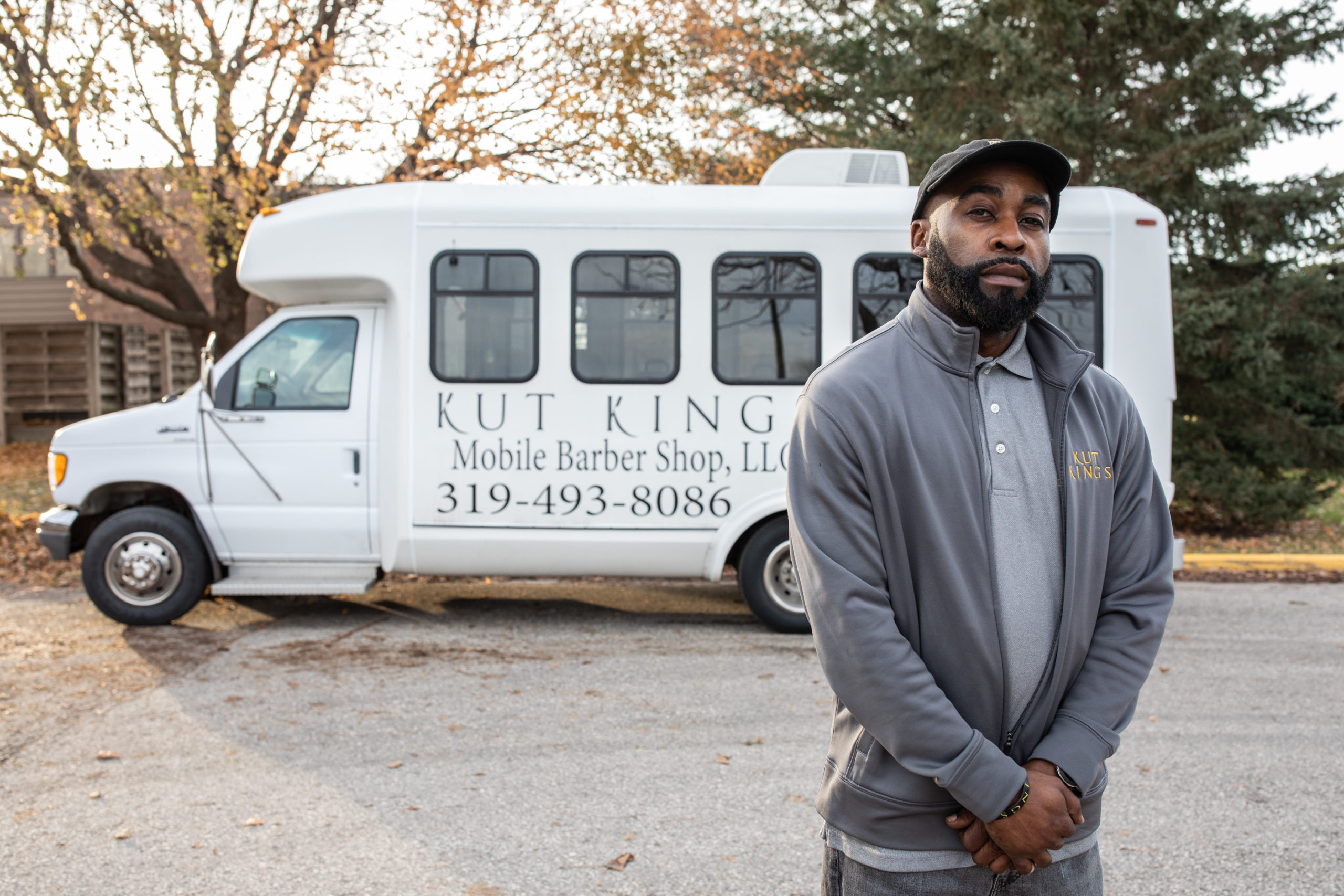 From relapse to redemption: How one man mobilized thousands into action

Tears welled up in William Burt’s eyes. It was Tuesday, March 10, 2020, and he was the guest of honor as Iowa Governor Kim Reynolds signed legislation allowing mobile barbershops to operate in the state. It was the culmination of an unlikely journey, which saw William go from a life of crime and incarceration to become the face of a legislative movement. How did he become the symbol of this effort? Why was he so emotional about a bill on mobile barbershops?

The answers lie in William’s past.

The turning point: a telling moment with his son

In 2007, when William was 27, his son visited him in prison and said, “You say your family is your number one priority, but if that was true, you’d be with us and not here.”

William had been in and out of prison since he was 14—the result of years of dealing drugs. He had three kids to support but kept relapsing into a life of crime. He was in prison again, at rock bottom.

William knew his son was right. He loved his kids. The only way he could be the father they needed was to make a choice. That moment was his turning point.

The seeds of change, however, had been planted back in 1999 when William started cutting hair for his brother to save their family money. When he went to prison the following year, he continued to cut hair—this time for fellow inmates. He had a knack for barbering, and his customers kept coming back. “I became the best barber in that prison in no time,” William recalls.

His skill wasn’t just cutting hair—he had a gift for connecting with people. His clients began sharing their stories and struggles, sometimes asking for life advice. “I learned how to barbershop talk, how to meet the needs of people,” he says.

William started dreaming of life after release: He would cut hair for a living. He was released in 2008 and applied for admission to barber school. Initially, he was postponed admission to a barber course because of his criminal record, but after he finally received his license in 2012, he began cutting hair at a barbershop in Waterloo, Iowa. He would go on to cut at multiple locations, including at Waverly and Wartburg.

Taking his show on the road

As fulfilling as his work was, William wanted to do more. In 2017, he decided to start a nonprofit and cut hair for free for those in underserved communities—and he would go to them, in a barbershop on wheels.

William invested about $30,000 of his own money to start Kut Kings. He couldn’t wait to get his nonprofit up and running and hoped he could make an impact beyond cutting hair. “Hopefully I can reach one [person] that’ll be able to inspire someone else … like a ripple effect,” he said. “Pay it forward.”

But his dream came crashing down: According to Iowa law at the time, mobile barbershops were illegal, a threat to public health and safety. The news hit William hard. “Throughout life you run into these obstacles, another door closed in my face,” he said. “So I took this one personal.”

The sanitation law made even less sense when he discovered that California, Georgia, Ohio and all six of Iowa’s neighboring states allow mobile barbershops. Iowa imposed onerous licensing burdens on professions ranging from massage therapist to dental assistant. Yet the Institute for Justice found that licensing laws cost Iowa more than 48,000 jobs and up to $4.6 billion in economic value every year.

William reached out to Iowa’s Board of Barbering to see if there was anything that could be done about the law, but officials there told him there was nothing they could do.

It was frustrating, but the same determination that motivated William to change his life led him to take on the law. “It became a personal mission for me,” he said. “I’m going to fight the law and I plan on winning.”

That’s when Americans for Prosperity-Iowa State Director Drew Klein and Deputy State Director Tyler Raygor heard William’s story and wanted to help amplify his voice. Americans for Prosperity, part of the Stand Together community, is a grassroots organization that recruits and unites concerned citizens to advance policies that will help people improve their lives. American for Prosperity worked to give William a statewide platform and brought the efforts of hundreds of grassroots volunteers to bring his story directly to Iowa legislators.

William became the face of a movement to reform occupational licensing laws across the state. More Iowans began to see how the costs of licensing laws hindered people like William from making an impact in their communities. They saw how the state required over 24 percent of its workforce to do their jobs—the second highest rate in the nation. In fact, Iowa requires licenses for 71 out of 102 low-income jobs. In comparison, regulation-friendly New York State licenses 41 out of 102.

When Governor Kim Reynolds delivered her Condition of the State address in January 2020, she voiced support for William’s cause. By then, the bill to allow mobile barbershops, SF 155, was already circulating through the state house.

Two months later, Governor Reynolds signed the bill, noting the role that William played in its passage and calling his life “testament to the power of redemption and how second chances can spark real change.”

Through hard work and determination and driven by the love of his family and friends, William overcame immense challenges. But William’s work is far from done. Iowans, and millions of Americans across the country, still face barriers in the form of licensing laws. Now he’s continuing to leverage his story and experience through partnership with Americans for Prosperity to be a beacon of hope for business owners to encourage more states to rethink burdensome licensing laws.