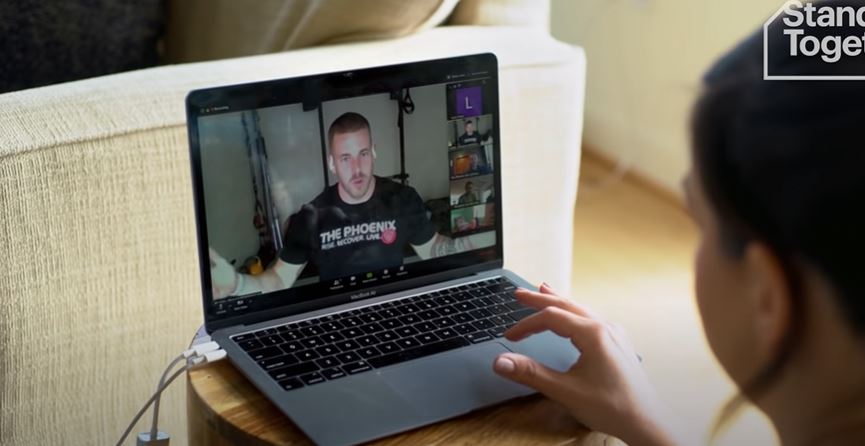 Virtual workouts have popped up everywhere online since the COVID-19 pandemic hit. But if you join a virtual workout hosted by The Phoenix, you’ll notice something that sets it apart from other online classes: the first exercise is never a warmup—it’s an icebreaker. That’s because the Phoenix is not just here to keep people in shape, it’s a “sober active community” that has been helping people beat addiction through fitness and relationships since 2006. The nonprofit organization now provides activities as varied as boxing, biking, and climbing for thousands of people at 45 locations around the country.

In March, shortly after social distancing guidelines were put in place, the leaders of The Phoenix realized it had to change its approach to meet its community’s needs and acted quickly to introduce a broad range of virtual events to replace their in-person activities, from meditation to strength training.

In the two months since the pandemic began, the Phoenix has discovered that virtual connection isn’t only a stopgap solution—it’s also an effective way to draw new people into The Phoenix community and help more people on their recovery journeys.

Chris Hoppe, an instructor at The Phoenix who leads fitness training and content for virtual classes, explains that isolation compounds the threat of relapse. “One of the hardest things about recovery is you feel like you’re alone, like ‘nobody else feels the way I feel,’” he says.

Leaders at The Phoenix had already been discussing the possibility of virtual classes prior to the pandemic, but it became their top priority when they realized their facilities couldn’t safely stay open. Since its start, The Phoenix has served over 33,000 individuals through in-person programming, and it needed a new solution to keep all members engaged.

“When all the stuff with COVID-19 hit, we realized that we couldn’t let our community down,” remembers Kelly Cave, an instructor based in the Boston area.

The Phoenix’s virtual class schedule includes at least one event every day—some days it offers as many as eight. About 10 instructors divvy up the responsibilities between themselves. Despite some digital limitations, they have found ways to make the workouts effective and accessible.

“I have heard that our workouts feel just as challenging as workouts in the gym,” says Kelly. The exercises are optimized for bodyweight movements, and instructors are trained to provide variations for different experience levels and equipment. Participants get creative, too—some even throw books in a backpack for added weight.

Of course, at The Phoenix, the workout is only half of the equation. Finding a way to maintain strong relationships was the biggest challenge posed by the new digital platform.

“We assumed for a long time that in-person connection was required. Our entire business model was built off of connection,” says Chris. In a virtual environment, “the big surprise was that it doesn’t need to be the same. For a lot of people, this level of connection is enough.”

In practice, “connection” means that virtual classes with The Phoenix are as conversational as they are challenging. It’s not required, but most participants turn on their webcams for the duration of the workout. Instructors welcome participants by name, and everyone has the opportunity to introduce themselves and share a bit about their lives.

Drew Morrow, a paramedic firefighter in Maine, has been in various recovery programs for years. His interest in outdoor activities and his experience as a personal trainer make him a perfect fit for The Phoenix. But the closest Phoenix gym is in Lowell, Massachusetts, over an hour from his home. Virtual classes gave him his first opportunity to join.

“From my first interaction with somebody, I felt like I was connected.”

He attends two or three events on most days, including 7 a.m. meditation, 9 a.m. strength training, and often an afternoon session of “Functional Movement PHX.” He’s also a regular at virtual “social hours,” which provide unstructured time for participants to get to know each other.

As a trainer, Drew is impressed with the quality of the workouts, but the depth of community is why he comes back. In just a couple months, he developed a deep friendship with his meditation instructor, and he enjoys meeting people from across the country. In one class, he was able to connect with a woman from Colorado who is also a firefighter in recovery.

Now that he knows what the Phoenix has to offer, Drew imagines he’ll make the drive to a physical Phoenix location a few times a week when they reopen—even if it means spending hours on the road.

“I’m making plans to follow through with that, and maybe get a chapter up here,” he says, “because this organization is just unbelievable.”

Drew’s experience reflects how The Phoenix is making the most of the moment: It’s drastically widening the net of who it can reach.

Chris estimates that more than half of the people joining his virtual classes are new to The Phoenix.

Kelly points out that even if she has the same total number of people in her classes as usual, they’re now joining from all over the country.

“It’s really cool that we have the opportunity to reach people that live in cities where we don’t have a [physical] Phoenix location.”

The accessibility of virtual classes also increases frequency of participation, by removing time, childcare, and transportation barriers that might prevent someone from visiting a physical gym regularly.

Ultimately, the growth in both reach and frequency address The Phoenix’s foundational mission: helping more people break the cycle of addiction.

“There is data that shows that more frequently attending Phoenix events improves the outcomes of the recovery participant,” says Chris.

It’s impossible to know when social distancing measures will end, or what a “new normal” may look like, but leaders at The Phoenix are optimistic about reaching more people who need a supportive community. While they began as a quick response to the crisis, virtual classes are here to stay.

“We have brought [our] programs to thousands,” says Scott Strode, founder of The Phoenix. “Now we can bring our virtual program to millions and provide a model for others.”